Inkscape 1.1 is the latest major Inkscape release that brings users many fresh new features and new functionality. The most notable changes include:

This feature was added by Google Summer of Code Student Abhay Raj Singh in 2020. Learn more about the feature's development on GitLab. UX issue 31 MR 2072

In this mode, a toned down view of the drawing (not click-sensitive) is shown behind the (click-sensitive) object outlines. The opacity of the original drawing in this view mode can be set in Edit → Preferences → Rendering: Outline overlay opacity. 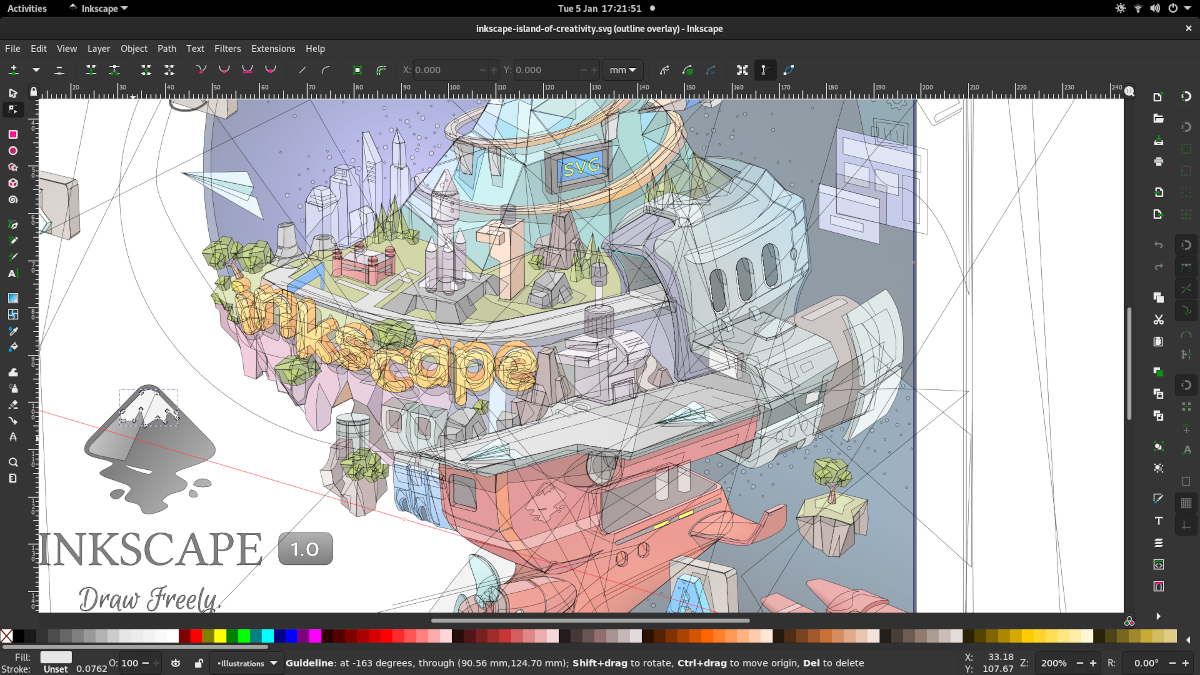 In this mode, all colors are displayed in grayscale, making this a useful feature for checking contrast. Can be activated in View → Gray Scale

New vector-based handels. The maximal handle size has been increased, so users with HiDPI displays will be able to enlarge them to a more comfortable size. Edit → Preferences → Interface: Handle size

A new selection mode for the lasso/rubber-band selection was added, which can now select every object that is either within the box or that touches its boundaries. The mode can be activated by pressing the corresponding button in the Selector tool's tool controls bar. On canvas, the mode is visualized by changing the color of the selection box to dashed red line while dragging.

TODO: record with new dashed line indicator instead of red 2520

not only the first rectangle. 2468

The docking feature has been refactored by Google Summer of Code Student Valentin Ionita in 2020. You can learn more about his work on GitLab (technical documentation).

A new welcome and onboarding screen was added. You can set up the look of Inkscape on a first run and select from presets of document settings. This dialog can be turned off.

Element selections API has been improved, the API in 10? of using self.svg.selected is deprecated in favour of the new self.svg.selection interface. The previous API will continue to work for the time being but should be updated to the new API. Selection is now a type of ElementList which provides filtering, ordering and other generalised functionality, if you need an element list for example to make a bounding box, this is the way to do it.