(definitely not released yet - AnnouncePlanning1.0)

Icon sets no longer consist of a single file containing all icons. Instead each icon is allocated it's own file. The directory structure must follow the standard structure for Gnome icons.

If you would like to create or convert your own icon set to the new format, please see the 'hicolor' and 'Tango' icon theme folders, in your Inkscape installation 'share' directory for suitable examples.

As a side effect of a bug fix to the icon preview dialog (see below), custom UI icon SVG files need to be updated to have their background color alpha channel set to 0 so that they display correctly (see Bug #1661989).

Third-party extensions need to be updated to work with this version of Inkscape.

Extensions that previously used the UniConvertor library for saving/opening various file formats have been removed:

Import formats that have been removed:

Export formats that have been removed:

Instructions for updating old extensions are available at Updating your Extension for 1.0

For packagers and those who compile Inkscape

The user interface has been changed to utilise a more recent version of GTK+. This is the widget toolkit that Inkscape makes use of to draw the user interface on the screen. This new version brings many improvements, especially for users of HiDPI screens. Bringing the newer GTK+ toolkit to Inkscape has been an eagerly anticipated goal for a long time. It has taken much effort by the Team involved, it was a focus point of the Boston Hackfest.

Improvements and fixes to the code for handling/restoring window size and position [1] . The window manager handles most of the jobs now, which should make it much more robust. If you still encounter problems with this, please report those to our bug tracker.

During the Inkscape Hackfest in Kiel, a significant change by Thomas Holder was integrated into the Inkscape codebase. It allows the User to optionally set the origin of their document to the top left corner of the page. This finally makes the coordinates that a User can see in the interface match the ones that are saved in the SVG data (unit conversions/transformations may be required), and makes working in Inkscape more comfortable for people who are used to this more standard behavior.

With Ctrl+Shift+Scroll wheel the drawing area can be rotated and viewed from different angles. In the bottom right corner of the Window, the viewing angle can be entered manually. Right-click to select between a set of preset values. Keyboard shortcuts for clockwise/counter-clockwise/no rotation can be set in the preferences.

On supported hardware (trackpad, touchpad, multi-touch screen), the canvas can be zoomed with the two-finger pinch gesture.

A new option for duplicating guides was added to the 'Guideline' dialog. This new feature, when used in conjunction with the 'relative change' option (dialog needs to be opened twice), makes it easier to create guides that are offset by a certain distance / angle from an existing guide. 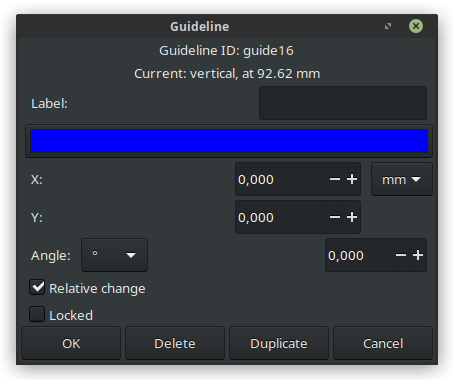 This new display mode is available under the "View->Display mode" menu. It ensures that all lines are visible, regardless of zoom level, while still drawing everything else normally.

This is especially useful for some CNC machines like laser cutters and vinyl cutters which use hairlines to denote cut lines.

You can now center the view on the page, without changing the zoom level.

This function is available via:

Changed behavior of Stroke to Path

The 'Stroke to Path' command now not only converts the stroke of a shape to path, but effectively splits it into its components.

In the case of applying it to a path that only has a stroke, the behavior is unchanged.

For paths that don't only have a stroke, but also a fill and/or markers, the result will be a group consisting of:

Clones and Symbols are now automatically unlinked, before a Boolean operation (union, difference, etc.), or one of the Path operations 'Combine', 'Break apart', or 'Stroke to Path' is performed.

A setting in the preferences at Behavior → Clones → Unlink Clones allows the User to disable the automatic unlinking.

When the option "Enable on-canvas alignment" is active in the "Align and Distribute" dialog, a new set of handles will appear on canvas when an object is clicked three times (first click: scale handles, second click: rotation/skew handles).

The handles can be used to align the selected objects relative to the area of the current selection.

A new option to add dots has been added to the tool. Click in place without moving the mouse to create a dot, Shift+Click to create a larger dot [needs documentation in keyboard shortcut list].

The circle tool can now also create closed ("filleted") circle shapes (closed arcs) with the click of a button.

New option to erase as clip, which allows the User to non-destructively erase (parts of) various types of elements, including raster images and clones.

The tool also has a new option to only measure selected objects when using click-and-drag.

Pressure sensitivity can now be enabled for the Pencil tool. This feature makes use of the PowerStroke Live Path Effect (LPE).

New settings for the tool are available for tweaking the behavior of the PowerStroke LPE when it is being created with the Pencil tool (and a graphics tablet/stylus):

Clip paths and masks now have an inverse mode in the menu, using the PowerClip and PowerMask LPEs.

Live Path Effects received a major overhaul, with lots of improvements and new features. The main changes are:

(Note: we have the 'multiple desktop preferences' problem here: If you have multiple Inkscape windows open, the last one will determine what will be saved to the preferences file, as preferences changes are only saved when Inkscape is closed, and the settings are only loaded from file when a new window is opened.)

In addition to this, the LPE list is now made available as a searchable dialog with an icon for each path effect, and options to favorite, display info about the selected effect and to apply it.

[The Boolean Operations LPE finally makes non-destructive boolean operations available in Inkscape. It works by adding the LPE to a path, then linking a copied path to it by clicking on the 'link to path' button. That way, two [more?] paths can be combined to a single shape, and both are still editable. Available options:

Improvements in Pen/Pencil mode. With "Alt", you can move the previous node.

This path effect now allows various objects instead of only paths and is even more powerful.

This new LPE creates uniformly dashed paths, optionally by subdividing the path's segments, or including dashes that are symmetrically wrapped around corners.

This new LPE creates an optimally fitted ellipse from a path's nodes.

In contrast to the already existing LPE "Ellipse by 5 points" this LPE is more flexible (since, depending on the number of points available, it can fit both circles and ellipses) and has more features. Especially technical illustrators can benefit from these features.

See LPE:_Ellipse_from_Points for a documentation.

This new LPE can add nodes to your paths and create jump stitches, to create data that can be converted for use with a stitching machine. To view the stitches that you added, activate the 'Show stitches' checkbox, and, if necessary, adjust the 'Show stitch gap' value, so you can see the single stitches.

There are various options for calculating the order of the stitching, for connecting the parts of the drawing and 3 different stitch patterns available. It is suggested to play around with these until you like the result.

For exporting your data, you can, for example, use the HPGL file format and go from there.

This new LPE adds fillet and chamfer to paths. Also adds a new internal class that allows to handle extra info per node, the LPE itself is an example of use the new classes.

This path effect displays the length of the path it is applied to in the selected unit and scale.

This new LPE adds options to clips and masks.

On import of an SVG file, there is now a dialog that asks if the user would like to link to the SVG file, to embed it (base64 encoded) into an tag, or if the objects in the SVG file should be imported into the document (which was how Inkscape handled importing SVG files previously).

[ TBC: The dpi value for displaying embedded SVG files can be set in the import dialog.]

The 'Embed' and 'Extract' options in the context menu for linked SVG files work the same as they do for raster images. The 'Edit externally' option will open the linked SVG file with Inkscape per default. This setting can be changed in the preferences' 'Imported Images' section.

The displaying of the dialogue can be disabled by checking the 'Don't ask me again' option.

Linked and embedded SVG images are displayed as their raster representations.

The export dialog has received several new options which are available when you expand the 'Advanced' section.

The new option 'Convert objects to paths' will take care of converting everything to a path non-destructively before the data is sent to the plotter. [gives wrong error message, maybe not working? https://gitlab.com/inkscape/inkscape/commit/dd3b6aa099175e2244e1e04dde45bf21a966425e#note_100908512]

Inkscape can now load fonts that are not installed on the system. By default Inkscape will load additional fonts from Inkscape's share folder (/share/inkscape/fonts) and the user's configuration folder (~/.config/inkscape/fonts). Custom folders can be set in preferences (see Tools → Text → Additional font directories).

If Inkscape has been compiled with a Pango library version that is at least 1.41.1, it comes with support for variable fonts (more info about how this looks. These are fonts that do not come with different faces, but often with various sliding scales for different font properties, like 'boldness', or 'condensing', or even playful features.

In 'Edit > Preferences > User Interface > Theme', users can set a custom GTK3 theme for Inkscape. If the theme comes with a dark variant, activating the 'Use dark theme' checkbox will result in the dark variant being used. The new theme will be applied immediately.

New theme folders can be added to the directory indicated in Edit > Preferences > System : User themes. A large selection of (more or less current) GTK3 themes are available for download at gnome-look.org

In 'Edit > Preferences > User Interface > Theme', the icon set to use can be selected. By default, Inkscape comes with 'hicolor' and 'Tango' icons. In addition to this, it offers to use the system icons.

Inkscape also comes with a default symbolic icon set as part of the 'hicolor' icon set. These icons can be colorised with a custom colour.

Changes to the icon set take effect when Inkscape is restarted, or when the entire user interface is reloaded by clicking on the 'Reload icons' button. This rebuilds all Inkscape windows. Rebuild takes a couple of seconds, during which the Inkscape interface will be invisible.

Saving the current file as template

A new entry for saving the current file as a template has been added to the 'File' menu. You need to specify a name for it, and optionally, you can add the template's author, a description and some keywords. A checkbox allows you to set the new template as the default template.

Inkscape now creates a CSV file (comma separated values) called "pages.csv". It is located in your Inkscape user preferences folder, next to your 'preferences.xml' file. This file contains the default page sizes that you can choose from in the 'Page' tab of the 'Document properties' dialog. You can edit the pages.csv file to remove the page sizes you won't use, or to add new ones.

Inkview was considerably improved and got some new features:

The Inkscape command line has undergone a large overhaul. The most important changes are:

Translations were updated for:

The installer was translated to:

Translations were dropped for:

For an exhaustive list of bugs that have been fixed, please see the milestones page for Inkscape 1.0.