The effect is based on a mathematical object from 2geom, called "d2sb2d", in which we store the values necessary for the deformation, and the 2geom function "compose", which computes the mathematical composition of functions. In this case, we compose the original path with the 2dsb2d (which holds the wanted deformation).

The effect needs 16 control points we called "handles" -- they are meant to be positioned by hand -- placed as a rectangular grid over the shape. The four corners are those of the bounding box of the path, and the others divide the rectangle evenly to form their original position. It is the difference between the actual position of the handles (chosen by the user) and their original position that is stored in the d2sb2d structure. This is done with a simple formula, which depends on the numbering of the handles, which is itself quite odd: 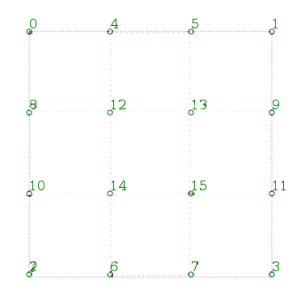 And it is not over yet! Apparently, for the effect to work properly, the path has to be translated to (0,0), and resized to be exactly 1 unit wide. Then, it should be translated back to its original position.