Taking a text and breaking it into blocks that have the same properties.

Breaking text into blocks is a two step process:

Proper shaping often requires knowledge of the characters before and after the text being shaped. For example, a user might want to change the color of a character in the middle of an Arabic word. Arabic uses different glyphs depending on if the character is at the beginning, in the middle, or at the end of a word. If the character is shaped out of context, the start form of the glyph will always be used. By putting it in context (using pango_shape_full()), the correct glyph will be chosen. (This was fixed for 1.1.)

Inkscape currently (1.1) shapes each SVG text node independently. (For example, in <text>AA<tspan>BB<tspan/>CC</text>, there are three text nodes, one for 'AA', one for 'BB', and one for 'CC'.) With pango_shape_full() this seems to handle correctly glyph selection for Arabic text. But there are situations where this does not work. For example, if one wanted to change the color of a mark (accent), the mark would not be properly placed over the base character:

When Pango itemizes text for Pango::Layout, it uses only attributes that should affect itemization:

Before shaping, it adds back:

The text is finally rendered with all attributes which adds back:

See pango_layout_check_lines() for how Pango::Layout does itemization (and line layout). 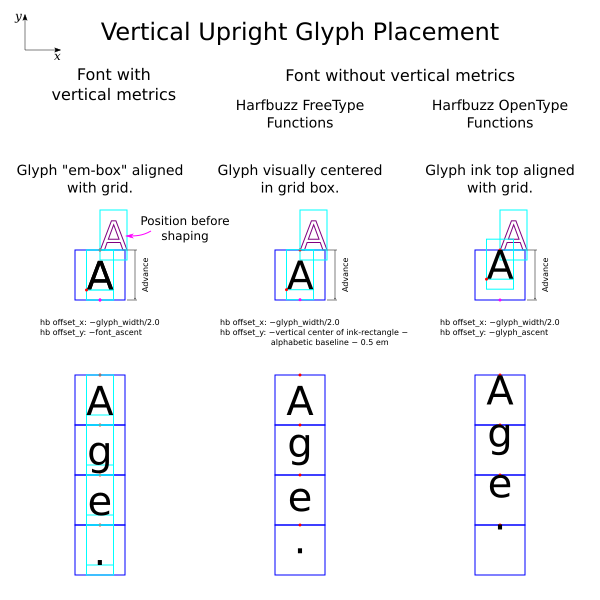 Fonts can request that the Typo values be given preference, but popular fonts like DejaVu Sans do not set the request flag. Pango::FontMetrics::get_ascent() and get_descent(), and hb_font_get_extents_for_direction() return the HHEA numbers if the flag is not set (see hb-ot-metrics.cc, _hb_ot_metrics_get_position_common()). To ensure that we use the Typo values we must resort to using FreeType to read the 'OS/2' table (with fallback to the HHEA table). If vertical metrics are requested, they are read from the VHEA table (which is unlikely to exist for most fonts). 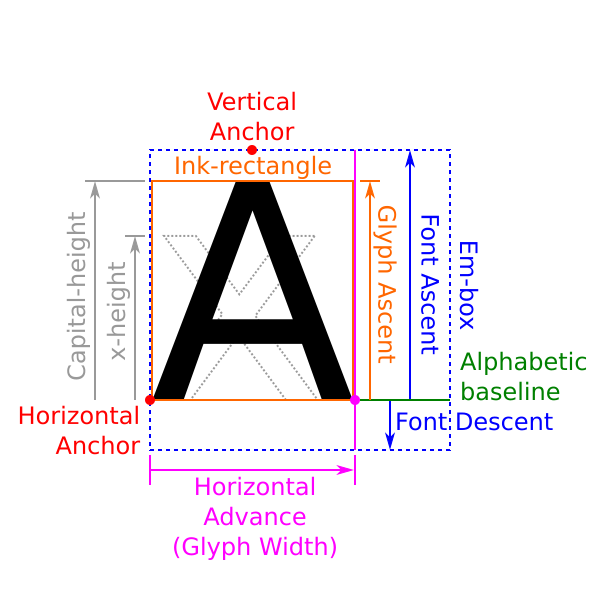