We returned zoom commands back to the command bar

Thanks to Tavs work we have more contextual right click menus for some objects on canvas and in Layers dialog. ( example: right clicking bitmap offers tracing bitmap and extracting image)

Dithering is now used both for Export of raster images as well as for displaying gradients on canvas(MR #3812). This functionality requires a special version of Cairo, our rendering engine. This means that it will only be available in the pre-packaged builds (for macOS, Windows and for the Linux AppImage).

Dithering does not fork on mesh gradients

For standard Linux package formats (deb, rpm, …), it depends upon your Linux distribution maintainers whether they will patch up the version of Cairo they want to distribute. We hope that this change will one day also be included in the official Cairo packages (Link to ongoing discussion). 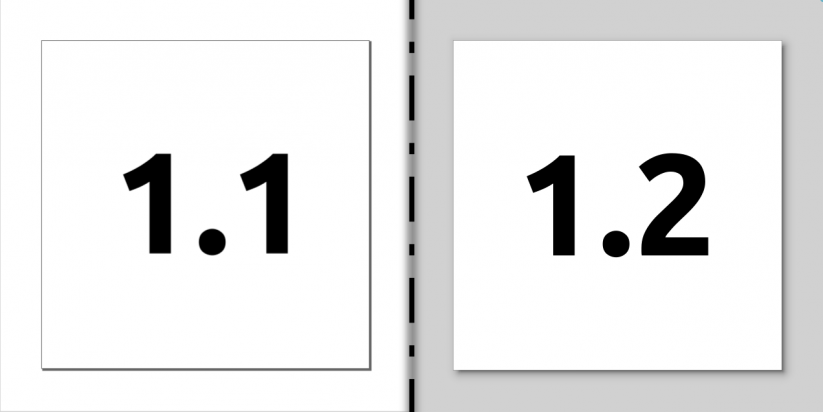 Snap settings are no longer saved with the document, but are set globally for all documents in the preferences and in the snap popover dialog. The option for enabling snapping in new documents has been removed, as it no longer makes sense.

The options for snapping perpendicularly and tangentially to paths or guide lines have been moved from the document preferences to the snap popover to make them more discoverable. The other snap options from the document settings dialog were removed. [TODO: check whether this is still true at the time of release]

During Google Summer of Code 2021, GSOC student Parth Pant worked on adding on-canvas alignment and distribution snapping, with support of the mentors Thomas Holder and Marc Jeanmougin. As a result, three new modes of on-canvas snapping have been added. These new modes make aligning and distributing objects a very easy drag-and-drop operation (MR #3294)..

When on-canvas alignment is active, Inkscape will display horizontal or vertical temporary guide lines that indicate when the selected object can be aligned relative to another object on the canvas. It connects the points of the objects that are in alignment. With distribution snapping, multiple objects close by are taken into account, making it possible to align objects in a grid, with very little effort.

Alignment and Distribution snapping guide lines display the distance(s) between objects as a little label per default. This can be disabled from Edit → Preferences → Snapping: Show snap distance in case of alignment or distribution snap.

Snapping nodes in the same path

Demo of alignment and distribution snapping

The tool now allows to set the origin of the selection for precise numerical positioning:

Background info: SVG 2.0 flowed text allows for shape-padding and shape-subtract attributes. shape-padding lets the text flow into a shape and leave some space between its edges and w where the text will start to flow. shape-subtract subtracts shapes with margin, so text can flow around other objects in the scene. These attributes were supported in Inkscape 1.0, but not exposed to the user. This version of Inkscape includes both an adjustable on-canvas knot for changing the padding as well as a Text menu item for setting text subtraction properties with a further knot to adjust it's margins.

The first tab of the Document properties dialog was refactored thoroughly to make it easier to use: 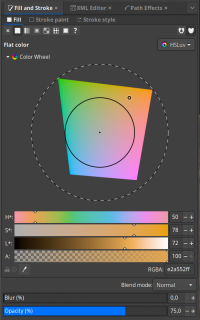 A replacement for the gradient editor was added to the Fill and Stroke dialog (MR #2688, Bug ux#67).

The markers drop down list has been replaced by a little dialog that displays all available markers in a grid, and even allows you to edit the selected marker! This project was undertaken by GSOC student Rachana Podaralla with the mentors Michael Kowalski, Marc Jeanmougin and Martin Owens (MR #3394, MR #3420).

When clicking on the drop down for the start, middle or end markers, you will see the following:

To choose your own dash pattern, select Custom in the dash pattern drop-down menu. This will make a new text field show up where you can add your new custom dash pattern by typing in numbers. Each number corresponds to the length of a dash or a gap. It always starts with a dash, and when it reaches the end, it will continue with the first number again, for the next gap or dash. So if you enter an even number of numbers, e.g. '1 1 4.5 4.5' the pattern will be 'dot - short gap - dash - long gap' and then repeat again, and for an uneven number of numbers, the pattern will be inverted when the first 'set' ends.

On the canvas, you can watch how your object changes when you change the custom dash pattern numbers.

With lots of user feedback, the Font Editor workflow has been updated with better previews, better performance and a higher degree of organization.

The Swatches dialog uses the same improved settings as the color palette.

We cleaned up this dialog, reduced width and added explanation for matrix transformations (MR #3363)

If you have an object selected that was created by the Live Path Effect of another object, you can now quickly find the responsible LPE object by clicking on the new button at the bottom of the Live Path Effects dialog. This is very useful for all Live Path effects that create dependent objects which can be selected independently, like the new Copies LPE, the Boolean Operations LPE, the Rotate Copies LPE and many more (MR #3479).

New Live path effects. Internally, we call this the \'Tiled Clones dialog on steroids\' - interactive tiling, using a huge range of different tiling types, setting the distance between objects numerically, changing scale, location, rotation per row / column, add more rows and columns on the fly. This can be used to quickly copy large numbers of objects non destructively and to create interesting grids and patterns and variations quickly (MR #3814).

We improved performance while dragging knot on canvas

We re-named This dialog from Export PNG image to Export to reflect new abilities of this dialog.

On macOS, enable all special menu items in the application menu and hide them from other menus (MR #3767)