Inkscape 1.1 is a stability and bugfix release.

[For changes made even before the 1.0 release that aren't in 1.0, try to find out if the checked and not stroked ones here: https://gitlab.com/inkscape/inkscape/-/issues/1030 have really not been cherrypicked]

The most notable improvements are:

A new menu item has been added to allow the user to prevent the rotation of the canvas with key bindings commonly associated with zooming in other applications. This setting can be toggled on a per-window basis. In addition, a new preference option has been added to allow users to set the mode to be on when a new window is opened.

In this mode, a toned down view of the drawing (not click-sensitive) is shown behind the (click-sensitive) object outlines. The opacity of the original drawing in this view mode can be set in Edit > Preferences > Rendering > Outline overlay opacity. 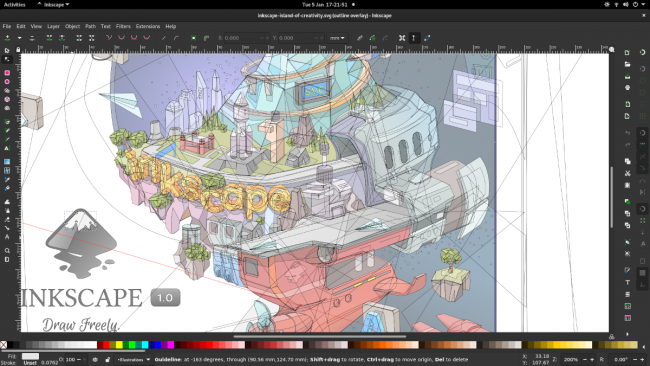 It's a style of the stroke that always renders as a 1px stroke independent of the zoom level of the canvas. This feature is useful for laser cutters and plotters. Hairline support:

Element selections API has been improved, the API in 10 of using self.svg.selected is deprecated in favour of the new self.svg.selection interface. The previous API will continue to work for the time being but should be updated to the new API. Selection is now a type of ElementList which provides filtering, ordering and other generalised functionality, if you need an element list for example to make a bounding box, this is the way to do it.