This wiki page will hold all extra documentation that I intend to write as I progress in the project.

The first functionality that I have succeeded to implement is Path Simplification.

It is a two step process:

Breaking up into line segments

While this process can be very simple if we simply use lib2geom's Geom::Curve abstraction with a recursive path splitting algorithm. I think it's still better to use separate pieces of codes to deal with each type of curve separately. There are two advantages to doing this. Firstly, if you know the curve type, you can use a faster algorithm to do the splitting, secondly we can use the same path splitting algorithms as livarot does and have identical results.

Usually line segments aren't further broken at all. So only their endpoint is added to the sequence. However, if the flag convertEvenLines is set, we break the line into smaller line segments such that each line segment has a length that's smaller than or equal to the threshold. This is useful in Path Simplification. 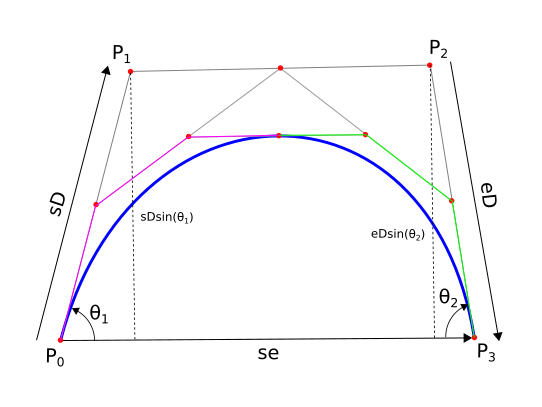 Otherwise, the bezier curve is split into two bezier curves as shown with colors magenta and green in the picture and then both are checked by the same conditions recursively. The center point (which is the common endpoint for both bezier curves) is added to the sequence of points.