Difference between revisions of "OnCanvasSymmetryTool"

The On-Canvas Support for Creating and Modifying Wallpaper Symmetry Groups is based on the functionality currently available in the "Create Tiled Clones ..." dialog.

Redesign parts of the Cloned Tiles User Interface. In particular, this project will focus on on-canvas control of the size, position, orientation and skew of the boundary of the base tile as well as on-canvas control of the number and “placement” of cloned tiles (placement refers to the attributes currently specified either by the row/column or the width/height fields in the current Create Cloned Tiles dialog).

UC 1) User has created one or more objects which they want to replicate using a group of symmetry relationships (rotation, reflection, translation or glide). The user must choose a symmetry group or create their own set of transformation rules.

Transformation base tiles for wallpaper groups

In order to choose the symmetry relationships that will produce the desired effect, the user must understand how clones of the base tile will be transformed. For example, if the user selects a symmetry type of CMM, they will want to know at a general level that the tile will be reflected in two orthogonal directions and rotated 180 degrees in a diagonal direction. At a more specific level, they will want to know across what lines the pattern will be reflected and what is the pivot point for the rotation.

An on-canvas visualization of the base tile and of the tiling pattern is proposed.

UC 2) The user has created several tiled clones from a base object and now wishes to modify the way the cloned objects are positioned. For example, they want to have more space between the copies. 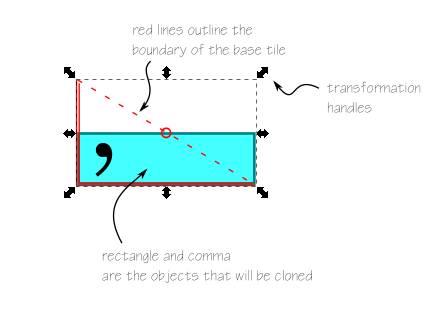 For each proposed feature, three things must be considered:

UC 2) Transformation of Base Tile 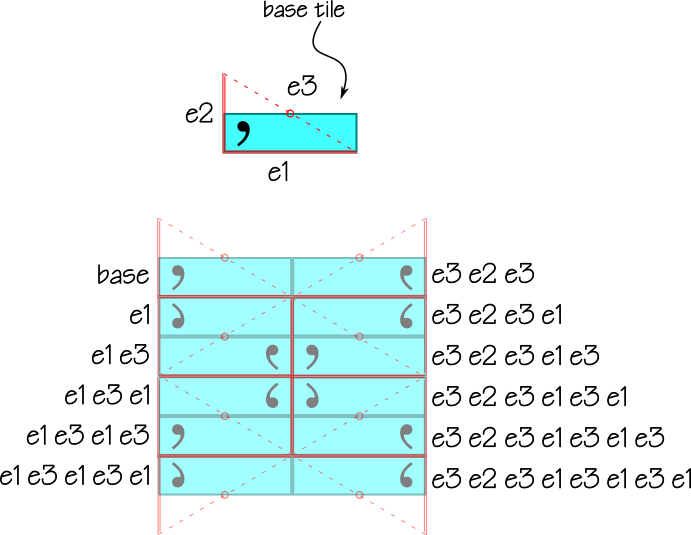