Difference between revisions of "MacOS alpha"

Template:Warning This page is work in progress and not to be used until this warning is being removed!

So you have been (t)asked to participate in testing the Inkscape 1.0 alpha for macOS and you are willing to embark on this endeavor - great! Let me first thank you for your interest and give you "the tour" about what's up ahead.

out with the old, in with the new

Testing the 1.0 alpha for macOS will probably be a bit different from what you might expect: although Inkscape has been around for years and there have been official releases for macOS in the past, this app has undergone a lot more changes than "only" the leap from 0.9x codebase to 1.0 would lead you to think. It uses an entirely new build system (rebuilt from scratch and still being worked on) and that proves to be an additional source introducing issues and regressions until it's matured. So in addition to probably new/changed/broken/... functionalities originating from the 1.0 codebase, there will be a lot of macOS-specific issues in Inkscape that none of the releases for the other platforms have. And these issues might be even of foundational nature; in fact, so foundational that you'd never expect them to surface in an app that already has years of development under its belt. To give you two examples, we've already had and fixed Inkscape crashing on opening/saving files as well as a broken text tool, accompanied by missing fonts and texts in a drawing... I know that sounds bad and I know testing is not all fun and games, but we have to push through this once (and only once!), so please don't let that scare you off!

There are many ways to approach this and you are free to do what you like (and we encourage you to do so), but let me give you two possibilities in case you are unsure how to get started.

If you are part of the early testing group (you know if you are because you'll have been told), you are now crew members of the starship Enterprise: "to boldly go where noone has gone before". The releases you are about to test have not undergone any previous testing besides "draw a circle, a rectangle, add some text, save file". So not only are you probably going to see more bugs, you'll also (hopefully) encounter all the remaining foundational issues that would make Picard do the facepalm. For example, nobody has tested if printing still works. And these are the things we need to find out and fix before we announce any kind of public testing, or else we would get swamped with issues and complaints. Do not let it discourage you if you find major issues like that, it is important that you do. So be brave, put on your red shirt and join the away team! (Enough with the Star Trek references already!)

If you are part of the regular testing group (you know if you are because you have not been told to put on a red shirt...), some brave men and women have sacrificed their sanity already been testing the alpha releases before you. That does not mean that you won't find any bugs, but hopefully there won't be any major blockers left that would stop you from testing after 5 minutes. But still, no guarantees.

You can access and download the alpha builds directly from the CI pipeline. To do that, first go to https://gitlab.com/inkscape/inkscape. On the sidebar on the left you'll find a small rocket icon to access the CI /CD menu. Click on that and select Pipelines. 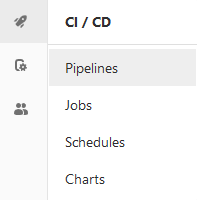 Now choose the latest pipeline from the master branch (unless otherwise instructed). Take note of the version information besides the branch name, 5f7a1b48 in this example. 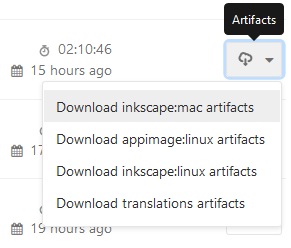 This will download a file named artifacts.zip to your computer. It includes build/artifacts/Inkscape.app. If you quicklook on the app you can confirm the version information.