Organizing linked bitmap images is quite a hassle at the moment. When a bitmap file is renamed or moved to a different location, the corresponding bitmap links need to be changed manually one by one in Inkscape, involving a tedious copy and paste process for the filenames. This can be improved

I imagine this being a window with three fields:

The user can then link Inkscape Image Links with the corresponding Imported Image Paths, which then appear in the document in real time. 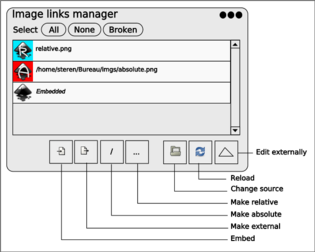 Excuse the dumb question: I find the relative linking useful. Sometimes, I did change globals paths to local ones in the SVG files manually, and it worked fine. Is there already (0.47pre3) a GUI for this change? (the proposal in Image properties dialog enhancements doesn't include any...) Thanks in advance. --Uncopy 07:35, 23 October 2009 (UTC)

An exemplary user workflow for a document with 10 broken image links would be as follows:

The use of this feature is straightforward: