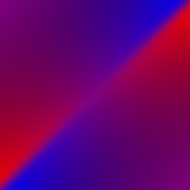 Note that with diffusion curves the blur itself can also be defined by a gradient, which could be used in the above image to let the edge be sharper in some areas. This is useful for depth of field effects for example.